The basic idea behind lenticular has been around a long time.  How long?  Well Shakespeare apparently alluded to “turning pictures” in his writing so we’re talking a technology that is more than 400 years old.

However, what old William was talking about was a rudimentary form of changing image and not lenticular as we know it today.  In this old but effective “technology” an accordion-like array of triangle shapes was created and stuck to a wall.  On one side of the triangle they applied image A and on the other side, image B.   In this case, it was the physical triangles themelsves that blocked ones view of the image on the alternate side.  As the passer-by moved past the accordion fold, he reached a spot where he could see the side with image B but was blocked from seeing image A.  And there you have it; an image that changes from A to B as your angle of view changes.  They called that display a “Tabula Scalata” and it was the original flip image. 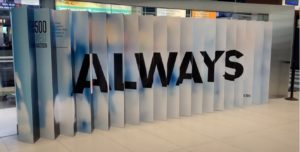 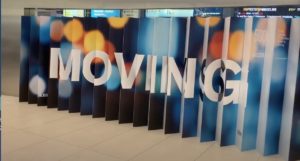 Jump forward about 350 years and you’ll find the first actual lenticular images.  Instead of a physical triangle sticking out from the wall, this ingenious technology uses a lens (hence the name “lenticular printing”) to block the view of one image while allowing the view of another.  A change in angle of view again creates a change in the image the viewer can see.  The lenses are flat so it is not as apparent to the viewer how and why the image changes and this really create the magical feel to lenticular imagery.

As advancements in lens technology were introduced over the years, it became possible to put more than two frames under the lens.  This allowed for animations of all sorts including morphs, zooms and even full motion.  3D lenticular was introduced by running the lens vertically and therefore showing a different perspective to each of the viewers eyes.  All depth perception is gained by our brains doing a calculation of the difference between what our two eyes are seeing.  Lenticular takes advantage of that fact by allowing each eye to see that slightly different perspective.

Over the past 20 years, companies like World3D have helped integrate lenticular printing into the world of marketing as advertisers have used it on postcards, packaging, large format displays and much much more.

It’s exciting to see how far this printing technology has come in just the past 20 years and to imagine where it will be in the future.  Stay tuned to see how far it can go!